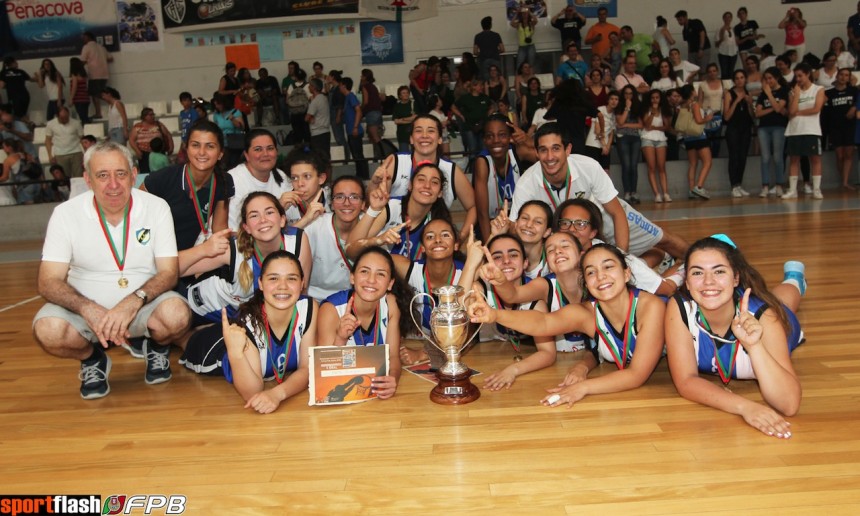 The season of 2014/2015 will go down in history of Carnide Basketball Club (CC). It came back to national titles after 34 years! The last title dates back to 1980/81 in the 2nd Seniors Female’s division.

Having won the National Under-19 Female’s Cup, Carnide comes back two weeks later to be crowned National Champion, now in Under-16 Female’s.

We know that work and determination are the basis for achieving results.

Though, in a year, two district finals, three national finals and two national titles is a remarkable work. The third place of our Senior National Team (National Championship of 2nd Female’s Division) was also a moment to be proud of. A season without a stain.

We now have got over 100 female athletes practicing federated sport at the highest level, and we bet the future through the mini-basketball. Thereby, supporting young people, learning to win and to lose and to respect the opponents.

A word to remind that teams are no exception and like businesses they rely primarily on people, in this case: on coaches; athletes; parents and leaders. Without vision, projects, ambition and a lot of dedication from all, the teams are doomed to become weakened, or to ‘freeze’ in less exciting structures.

HOLOS is honored to support this project that it states year after year. The CC is already an essential team in female’s basketball training in Portugal.

The “easier” is done: to make an impression. However, the most difficult should be to keep up the pace.

Founded in 1920, the CC has lived moments of glory. The real challenge now will be to ensure continuity.

Everything will depend on our ability to devote the current enthusiasm to the team. Always bearing in mind the training!

We want more for the next season. As for us, we will be here. You can count on HOLOS!